← Arico Nuevo revisited in May
An exciting new walk in the reserve of the Barranco del Infierno near Ifonche, Tenerife →

A Ridge walk to Finca Guergues in the Rural Park of Teno, NW Tenerife

Wild aniseed (Bupleurum salicifolium) is a Macronesian endemic. Here is is growing on a cliff out of reach of the goats

This walk in Teno is  a there and back walk along an old path along a rocky ridge which is quite narrow in places. There are quite a lot of ups and downs on the rocky paths with fabulous views either side of the deep ravines, or barrancos, and the ridges beyond.

We met a herd of goats coming the other way on the path at a fairly narrow point of the ridge.

The narrow ridge ends in a surprising way, the path goes to the left of a rocky pinnacle and comes out at the top of a wide meadow sloping westwards down towards the sea. It is actually a series of terraced fields which in the past were used to grow cereals. There is an old farmhouse and some other small buildings. 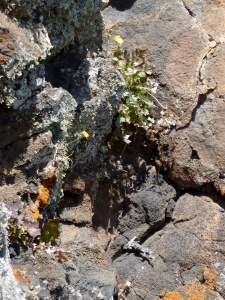 The walk starts from the second lay-by on the Masca road as it leaves Santiago del Teide, where we parked. Then we walked down to the point of the hairpin bend, which is where the path starts, to the right of a track leading to the Casas Araza, a farm which can be seen from the road.  Follow the clear path with cairns across to the right and down a slope to join the path onto the ridge. The ridge is grazed by a herd of goats and we met them half-way along going back for milking.

A lovely specimen of Canary tree bindweed (Convolvulus floridus) on a cliff. This Canary endemic is used as a street shrub, but it is great to see it in its natural environment

Because of the goats the rare Teno vegetation was confined to cliffs which were inaccessible to them. There was also plenty of Retama (Retama raetam) along the route which would have been giving off it gorgeous scent a month ago, but the white flowers were mainly over.

When we reached the fields, we just walked down to the farmhouse and the threshing floor and returned to the ridge path. If you want to explore further you can walk down towards the cliffs, but remember you have to walk up again!

Our walk took 3.5 hours and was 6 km long with around 400m cumulative ascent. However, you could lengthen the walk with further exploration at the far end. 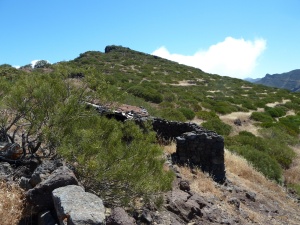 The old farmhouse beside the old fields at the end of the ridge. The fields are now dotted with Retama bushes

A view towards Teide from the far end of the ridge

← Arico Nuevo revisited in May
An exciting new walk in the reserve of the Barranco del Infierno near Ifonche, Tenerife →