A walk with fantastic views from Tamaimo, West Tenerife 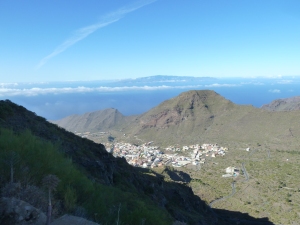 I did this walk with a group of friends on October 23rd when we were still having very wam sunny weather with clear skies making excellent views. Since then the weather has got more autumnal and yesterday we had a whole day of rain in Guia de Isora. Of course that is not a bad thing for a naturalist, as we will, of course, see more growth and flowering of the plants in the coming weeks. It’s back to sun today, so no complaints!

The new ring road as it enters the tunnels from the Chio side. We were pleased to see the work has restarted in October as promised.

The walk starts from Tamaimo in the Santiago valley. We left the TF-82 leading to Chio and Guia de Isora, on a narrow road called Calle la Rosa. It is a steep street between houses, bending to the right and climbing till it reaches the last house. From here on there is a footpath, zig-zagging up the steep side of the valley, with the views improving all the time as you climb.

The path reaches the end of another tarmac road as you near the top. We went left on the road for a few yards and then left onto another footpath. This led us to the edge of the new ring road that is being built at the moment. The path used to go straight on here, but has been diverted down a deep cutting, through a tunnel and up the other side to meet the old path. We were pleased to see that, after a silent summer on the road with no work being done due to shortage of money, some work has restarted as promised. 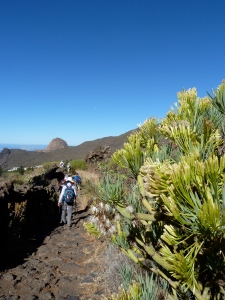 The path heads towards Risco Blanco in the distance, with Verode (Kleinia nerifolia) in the foreground.

The path continues uphill till it reaches Arguayo’s bypass which it crosses to join the main street through the village, where we went left. Towards the end of the village, on the left, is a pottery museum where you can see potters demonstrating the traditional methods of making pots. The work was traditionally done by women, and outside the museum is a lovely statue in tribute to their work. The museum is worth a quick visit, if it is open. It is housed in a typical old canarian house built around a courtyard.

We turned left after the museum, passing the statues to reach the bypass again, which we crossed again to join a footpath on the other side. The footpath starts as a steep concrete road with steps in the middle, and shortly has a fork in it, where we turned left. From here it  is roughly level for a while before turning sharp right and starting a long but gentle descent back into the valley. From the flat bit we were able to look down the valley and down to the roadworks below at the entrance to the tunnel which goes under the mountain we were walking around.

The old path wanders between walls alongside the new road

The descending path is surrounded by a great diversity of plants, which makes this walk of great interest in the spring, and into the summer, but without any substantial rain yet this autumn there were few flowers to see this time, just the Verode (Kleinia nerifolia) which seems to flower whether or not there has been rain, and then launches huge numbers of seeds on hairy ‘parachutes’.

The path comes down to the level of the new road and crosses a track, continuing for a while along the right-hand side of the road, until it reaches a tunnel built under the road, and continues on the other side. An embankment on the right of the path here had a lot of native plants growing on it, including the local Marguerite (Argyranthemum gracile) which was in flower. Then the path reaches a fork, the path to the right goes to Santiago del Teide, but we took the left one, to El Molledo, which passes an electricity pylon, goes through some fig trees to reach a pedestrian crossing across the main road from Santiago del Teide to Los Gigantes. Over the crossing, we walked down into the village to the square by the church, where there are lots of benches so it makes a good lunch spot.

After lunch we left the square on the opposite side, going across a cross-roads into a narrow street heading downwards and towards the other side of the valley. It came down to the streambed of the barranco running down the valley, and became a footpath crossing it and going up the other side to a signpost at a junction, where we went straight on, and again straight on at the next signpost. Shortly after the second signpost we took the left fork in the path, which descended slightly and then contoured around the edge of the valley with fine views down it, and across it to Mt Teide.

A geological dyke forming the core of the ridge we walked down.

The path passes a fenced-off small finca, which, before the 2007 forest fire that affected this area, was a goat farm. Now the goats are kept lower down the valley. Then a small climb takes the path to the top of the ridge, where a huge geological dyke can be seen, which forms the core of the ridge. It is an intrusion of molten rock during volcanic activity, and is composed of rock more resistant to erosion than the rock into which it intruded. The path then follows the dyke down the ridge, with the dyke forming a high wall on the left of the path. It is topped in places by a rock plant with yellow flowers in spring, a Houseleek (Aeonium sedifolium).

On this occasion the only plant flowering here was the Tenerife lavender (Lavandula buchii), growing out of the side of the dyke. 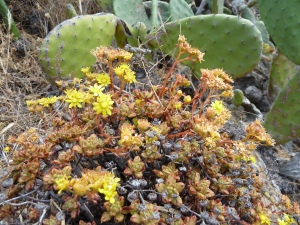 A Canary endemic houseleek (Aeonium sedifolium) growing on the large dyke. (Photo taken on 15th May, 2013)

A junction with a signpost indicates our chosen path for descent from the ridge, going left in gentle zig-zags. On the left as we start the descent is a cliff, which in spring is worth scanning for Tenerife samphire (Vieraea laevigata), a yellow daisy-flower which hangs off the cliff, which is an endemic of the Teno area. It is also an area I have often seen Ravens (Corvus corax tingitanus) flying.

Tenerife samphire (Vieraea laevigata), a Tenerife endemic, on the cliff near the descending path. (Photo taken 15th May, 2013)

At the bottom of the descent another signpost at the junction with the path running down the valley edge, and we turned right. After a short while we turned left where an arrow indicated a path crossing the barranco streambed to turn gently downhill. Or there is another turning further on also. Both join up after entering Tamaimo and arrive at the main road just below the T-junction in the middle of the town. To get back to where we started we went up to the T-junction and turned right, but we stopped in a bar for refreshments first! 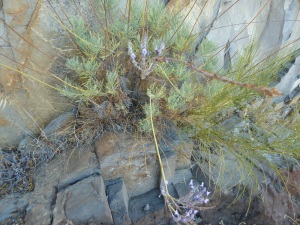 The cliff on the left of the descending path