A varied circular walk in Anaga

Anaga is the north-east peninsula of Tenerife whose rugged landscape houses the biggest area of the remaining laurel forests which used to cover much larger areas in the island.  In the summer the laurel forests are lovely to walk in due to the deep shade, and there are quite a few flowers in and at the edges of the laurel forest which flower late into the summer. 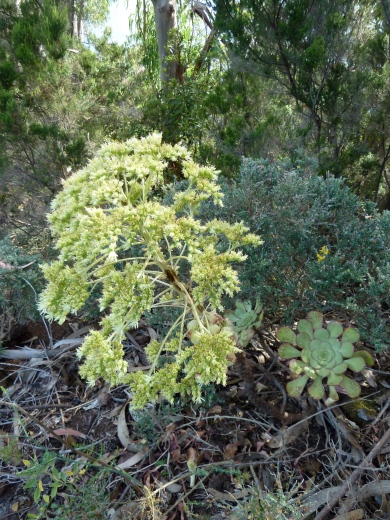 Roof houseleek (Aeonium urbicum var urbicum) beside the path. Most have already finished flowering, so this one was late.

The route we decided to explore was a circular walk using some paths we already knew, but also one whole section that was entirely new to us. We like to explore new paths in the summer when there are fewer of us, so that we can then offer new walks to the group in the winter months, when the numbers swell considerably.

The walk was a circular that could start and finish at Cruz de Carmen, which is at the top of the backbone ridge which runs the length of the peninsula. That would mean all the downhill at the beginning, and all the uphill at the end of the walk, so we decided to start half-way down the slope, so we would end with a downhill stretch. So we drove down the road signposted to Los Batanes and parked halfway down the zig-zagging road.

A view to the village of El Batán abajo (lower), and beyond that to Chinamada on the far ridge.

We then had to walk down the road for a little way to find the path going off the end of a hairpin bend and heading downhill through a tunnel of laurels. we came out at the road on the next hairpin and the path then plunged steeply down to the road again.  We were now on the edge of the laurel forest, so as we walked along the road for quite a way we had some lovely views. The vegetation was more open, and there were small fields dotted on the less acute slopes. 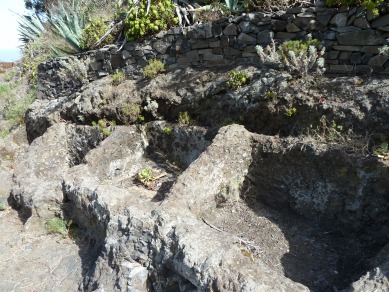 We turned left onto a minor road signposted ‘Bejía’ and then took a path leaving on a bend to the left of a rocky ridge. It descended steeply to the village of Bejía, rejoining the minor road before entering it.  Then just before another bend we turned right onto a yellow/white waymarked trail to El Batán abajo, which we entered from the top, after passing a columnar rock above it, called Roque los Milanos.  We walked down through all the village till we reached the square overlooking the deep ravine beyond. The village was decked out with streamers and other decorations as the annual fiesta was due to start in a day or two.

We knew we had to leave on a path going down from the square, and after a little bit of descent we reached a signboard describing the textile industry which was important in this area in the past.  The signboard was by a path junction where we turned left, and this began the part of the walk which was entirely unfamiliar to us.  The path descended steeply past a number of houses, and then on down to the ravine streambed, where there were still some rainwater puddles in the hollows of the rocky streambed.  From these puddles, some of which were quite large, were emerging numerous small frogs about 5cm long, and from the largest one a lot of croaking could be heard. This is a rare experience on Tenerife!

We crossed the streambed and then the path ran along level for a while, crossed a tributary streambed before starting up a steep ridge with a zig-zag path. The lower part of the ridge had lots of wild Jasmine (Jasminum odoratissimum) shrubs, with their tiny yellow flowers. Higher up there were lots of Shrubby houseleek (Aeonium lindleyi) in flower beside the path and on cliffs opposite. The path went in and out around different ridges and at one point went down to pass along the base of a red-brown cliff. Growing in a recessed shady layer of the cliff alongside the path was a lot of Maidenhair fern (Adiantum capillus-veneris).

Maidenhair fern (Adiantum capillus-veneris) beneath a cliff beside the path 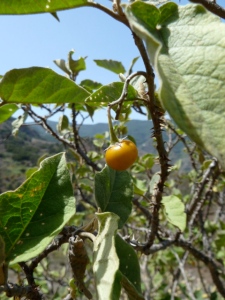 The path was easy to follow for its whole length, but was in places a little rough underfoot. Nothing we could not cope with as experienced Tenerife walkers, but not as good as the yellow/white waymarked trails.

More bends along the path and we were approaching Chinamada when I stopped in my tracks. A large shrub in front of me had thorny stems, and looked familiar even though I have only seen it once before. It was a specimen of the rare Canary endemic, Canary nightshade (Solanum vespertilio), and I was pleased with myself for recognising it, even before noticing that it had some fruits on it, about 1cm in diameter, looking a bit like miniature tomatoes. The Solanum family does, of course, include both nightshade and tomatoes, as well as potatoes, and other crop plants.

A view to the Roque Taborno

The path reached a tarmac road at Chinamada, and we turned a sharp right onto another footpath to begin our ascent to Cruz de Carmen. The path is a yellow/white waymarked trail, so it is easy to follow. We were now back onto paths we knew, and had some shady sections to look forward to for most of the climb, whereas we had been climbing in the open on the last bit. However, it is not all climbing, there are some steep bits, but in between some relatively gentle bits with fine views.  Halfway up, and just before plunging into the deep laurel forest where few views can be found, we enjoyed a fine view to the odd-shaped Roque Taborno.

Milky cineraria (Pericallis appendiculata) is a typical plant of the shady laurel forest, which flowers in summer

We reached Cruz de Carmen and had a well-earned rest before completing the circuit by following the yellow/white trail signposted for Bajamar until we got back to the car.

The route was approximately 15km and 700m of climbing and descent, I cannot be more specific as my GPS had trouble finding itself at both the beginning and the end.  It took us 5 hours 40 minutes on a warm summer day.  However, the great variety of habitats we passed through, and the dramatic scenery, made it a very rewarding route.

I was unable to record a GPS track of my own, but we were following the GPS track in the link below, contributed by Pedro Gonzalez: