A dramatic ridge walk in Teno

The start of the walk from Los Carrizales

I did this walk last Friday with a friend.  It was a lovely sunny clear day so the views were amazing.  The walk starts near Los Carrizales, a little village in Teno.  We drove north through Masca and on past the Mirador de Hilda till we reached the turning left signposted ‘Los Carrizales’.  Turning down this narrow road, with very broken tarmac, we stopped on the first big bend where the road continued to the right.  On the bend there is parking off the road for 2-3 cars.  The path starts from just off the point of the bend, and is track-width with a metal post in the centre.  It is a very clear path, and continues that way even though it gets narrower, until reaching an old farmhouse with a threshing-floor and corral adjacent, after about an hour’s walking

As we set out along the path a high rock, called, appropriately, El Roque,  towered over us to the left.  I looked up it and used the binoculars to discover it was covered with Canary houseleek (Aeonium canariensis) and Tenerife samphire (Vieraea laevigata), both of which were in flower.  As the path climbed up to the far side of the rock it divided, the left-hand fork with a rope handrail led up to a ridge with fine views, and nestled down just below the ridge was a little cottage.

Continuing with the path along the ridge I noticed we passed plants of Purple Spurge (Euphorbia atropurpurea), which, although they were past flowering, were still colourful with their purple bracts and seedpods.  There were also some compact, erect false sage plants with white felted small leaves.  Few were in flower in the drought conditions, but the few there were enabled me to confirm it was the local endemic Sideritis brevicaulis. 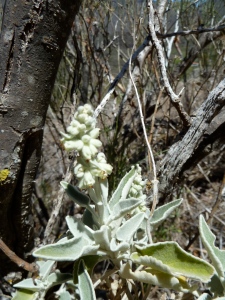 The path then approached another rock with a dyke going straight through it (see photo), and climbed up its side in a zig-zag.  This part of the walk could cause problems for those who don’t like heights as there is a drop off to the side, but the path itself is safe provided you watch your step.

Canary houseleek (Aeonium canariense) near the start of the walk

As you round the side of that rock, the path stretches out in front, then another zig-zag takes you up to another open area with fantastic views, looking ahead at another rock to skirt around.  Beyond that another rock is passed by a cobbled path up the side and then the landscape begins to open out.  We made our way off the path up to a cairn on the left which offered views to the south, and to the north we could see the meadows spreading out down the hill towards the cliffs below.

The threshing-floor, with the farmhouse beyond, at the end of the well-defined path

Continuing on the path we soon caught sight of the old farmhouse.  The roof has caved in but the threshing-floor and corral are still in good condition.  They nestle just below the ridge, facing north over the farmland.  This is where the good path ran out.  We spent quite a while trying to find paths continuing but all were ill-defined and involved pushing our way through retama bushes, etc.  It was time and energy consuming.  We finally gave up and made our way back up to the farmhouse on the exposed rocks at the edge of the ridge, this proved easier than our way down, though it did involve a little rock scambling.

The only way back is, of course, back along the same narrow ridge.  But the reverse trip gives you different views, including glimpses of Teide, as well as views to Los Carrizales village with its fertile fields, and to the Barranco Juan Lopez on the other side of the ridge, and of the Fortaleza de Masca – the massive fort-like rock on the next ridge to the south. 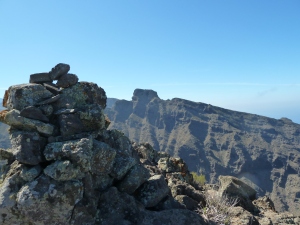 On the return journey I noticed a diminutive plant of the Masca daisy (Argyranthemum foeniculaceum) flowering by the path – most of the plants I had seen were not in flower.

The walk to the farmhouse takes only 1 hour and the return 1 hour.  The gradients are mostly gentle, with several ups and downs but nothing too strenuous.  My GPS did not record the cumulative climb correctly but it was probably around 300m for the both ways path to the farmhouse.  Beyond the farmhouse is only for the adventurous, and remember that the more you go down there, the further you will have to walk up again.