← Walking Los Organos of Orotava
A dramatic walk in Anaga →

The first signpost for the GR 131 at La Esperanza

Last Wednesday the group I walk with started a project for the winter, walking the GR 131 from La Esperanza to Arona. As we are based in the south, we are all very familiar with the path at the Arona end, from the Degollada de Guajara, through Vilaflor and Ifonche. But we decided it would be good to walk the rest of the path, in sections. We started from La Esperanza on Wednesday, and did stage 1, the first 13km, and then took a track from the path to the road on the ridge, the TF-24, to arrive there on a bend just above km 17.

It was a pleasant walk, and not excessively strenuous, which took the group around 4 hours.  The path starts opposite the Ayuntamiento (Local Council) building in the centre of La Esperanza.  There is a car park opposite and at the far end of the car park is a signboard about the GR-131 with a map.  What it lacks is a sign to show exactly where the path begins.  In fact it starts on some steps to the left of the signboard.  When you climb these you see another, wider, flight of steps continuing upwards, and at the left-hand side of these steps is the first waymark with two parallel lines of paint, one dark red and one white.   A little higher up we encountered the first signpost (see picture), announcing the distance to Arona as 85.4 km.

The first small section was up a valley in deep shade from laurel trees, which were unfortunately too tall to identify, and anyway, I was still struggling to initiate my GPS while the group was eager to get going.  At the top of this short section the path joins tarmac and direct you to the left to join another tarmac road with a steep incline between houses as you get out of the town.  On the right on the start of the climb the tall laurel trees were Viñatigos (Persea indica).

Passing a turning circle in the road with a bus shelter where some older men sat, the path continued on tarmac a bit further, but it now was a more rural road.  This in turn became a dirt track and continued a bit further up before turning to the right, and a bit downhill, onto a pleasant dirt track in the forest.  The walk here was a delightful respite after our initial hard climb in the sun, which had warmed us up.  Pine trees (Pinus canariensis) on both sides of the track had shrubs of faya (Myrica faya) and tree heaths (Erica arborea), with other species such as Canary holly (Ilex canariensis), malfurada (Hypericum grandifolium), Balm of Gilead (Cedronella canariensis) and Daphne (Daphne gnidium).  This gentle walk on a track continued for about 6 km, and took us an hour and a half including a stop for lunch, before the signposted route took a turn to the left up a steep footpath.  In this stretch there were two turnings to the right to different picnic sites, but both involved a diversion off the route of up to a kilometer which would have involved a drop in altitude as well.

After a short sharp climb on the footpath, we again joined a track, going to the right. The track started out fairly level but then started climbing fairly steeply for a track, rising 180m in just 1.4 km.  Towards the end of this stretch we found ourselves at Siete Fuentes which had featured on some of the signposts.  This turned out to be a pleasant picnic site in the woods, with tables and benches, a shelter from the rain, and a water tap.  A footpath to the left headed up into the woods and, I believe, ends up joining the main road around km 17, but we continued along the red/white signposted route a bit further. 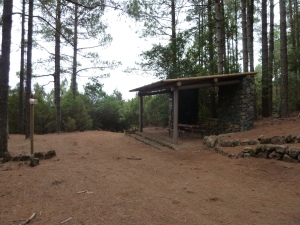 Shortly after Siete Fuentes the route left the track and became a footpath zig-zagging up a steep hillside.  The zig-zags made it a gentle manageable slope to walk up, and it was all in the shade of tall pine trees.  We crossed a track and continued uphill on the zig-zag path another 30 mins until we reached the track where we were to leave the GR 131 for the day.

A left turn onto the track, followed soon after by another left turn at a junction of tracks brought us out at the road on a bend, after a walk of about 2km.

← Walking Los Organos of Orotava
A dramatic walk in Anaga →