Addendum 5.2.2017 – I have recently done this walk again a couple of times in recent months and cannot now recommend it.  It is becoming increasingly dangerous. 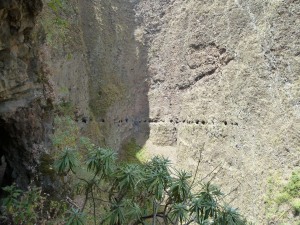 The classic view of the ‘windows’ – holes in the side of a tunnel carrying a disused water channel.

I had done this walk only once before, and it is amazing how selective your memory is!  I had remembered the tunnels, the plant interest and the fabulous views, but I had forgotten how overgrown the paths are, and difficult in places.  This is again a walk that is not for those with vertigo, or of nervous disposition, as there are times you are walking along a narrow path, or on top of a canal (water channel) with a vertical or near vertical drop to one side.

The path is not well-maintained because I think the authorities would rather not encourage people to use it.  However, it is well-trodden, so there must be quite a few intrepid adventurers!  The path starts from a minor road called the Camino de Anocheza which goes up from the main road just south of the Mirador de Don Martín, a landmark building on the southern edge of the Güimar valley, which is unfortunately shut!  We drove up this single-track road and found a place at 750m of altitude where there was a fairly large area of gravel at the side of the road where one could park without inconveniencing other traffic.  This is because we wanted to do the walk as a there-and-back.

Lots of walkers do it as a circular or linear but it is a pretty tough one if you add the climb and descent.So we had 300m of steep climbing to get to the level of the canal, and then it is pretty level.  We walked along the path, jumping on and off the canal as the path required and pushing past bushes growing out over both.  The hillside above and below us quite quickly got steeper, as we were now on the ‘Ladera de Güimar’ which is the steep side of the valley.  Then we got to an amazing sight, an upside down excavator!  Considering the only access to the place was the narrow path we had just walked, and that the hillside both up and down was precipitously steep, one cannot imagine how the excavator got there.  It is lodged on a very narrow ledge, just in front of the start of the first tunnel.

We had brought with us helmets and torches, so we got them ready and entered the tunnel.  It was deliciously cool on a hot day as we made our way, sometimes in the dry water channel, sometimes to the side of it.  The exit from the tunnel found us on a narrow path with cliffs above and below and lush vegetation in the form of shrubs and small trees, such as Atlantic Islands buckthorn (Rhamnus glandulosus).  This is where I remembered the state of the path!  Traversing to the next tunnel involved climbing up and down and around the substantial trunks of trees and tree heaths.

Walking the path and negotiating the tunnels leaves you little time to think of anything else, such that it is hard to remember how many tunnels there are!  I think the total is 6, of which we walked 5, because we were doing a there-and-back, so there was no point going through the last one.  Some tunnels, like the first, are complete tunnels with no ‘windows’, others have the odd ‘window’, and it is only the fifth one that has lots of windows, curving around a barranco carved out in the cliff, so that you can see from one side to the other. 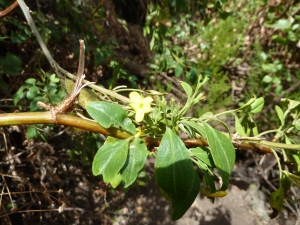 Each time you exit a tunnel the view has changed as the valley side is not straight, as it appears from a distance, but has indentations where water has carved out a barranco, so sometimes you are on a sunny promontory where the plants are the dry-tolerant sort – mostly flowerless and leafless at this time of the year, though there were a few flowers on the wild jasmine  (Jasminum odoratissimum) and on a weeping asparagus (Asparagus plocamoides).  At other times you are in a shady nook in the cliff where it is green with shrubs and trees of the cloud forest zone – the laurels, such as Canary Island Laurel (Laurus novocanariensis),   Faya (Myrica faya), Canary holly (Ilex canariensis), Canary strawberry tree (Arbutus canariensis) and the Atlantic Islands buckthorn. 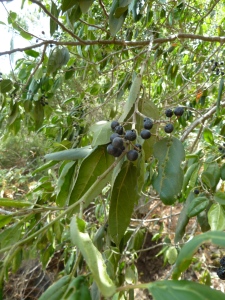 Having reached the fifth tunnel with the multiple windows, we walked all round to get all the different views, taking lots of photos, and had our lunch enjoying the view, in delightful summer shade.  Just near our lunch spot, hanging off the cliff I saw another plant in flower, Atlantic Islands Hare’s Ear (Bupleurum salicifolium) a late-flowering plant from the dry-tolerant zone.  Then we retraced our steps back to the car.

Although the walk was only 10.9 km both ways with little more than 300m climbing, it took us five and a quarter hours because of the difficulties underfoot.  But it is certainly a remarkable walk, and quite an experience!